Silver: Comey and the Press were Decisive in the 2016 Election

Nate Silver recently tweeted some thoughts about the 2016 election that illustrated something he had not commented on before: How Comey’s announcement about Clinton emails 11 days before the election had a decisive impact on the election thanks in large part to the coverage it received from the media.

It’s a fairly open-and-shut case. But the media’s election post-mortems have mostly ignored it because it implicates the media’s judgement. pic.twitter.com/cBLifP9WLu 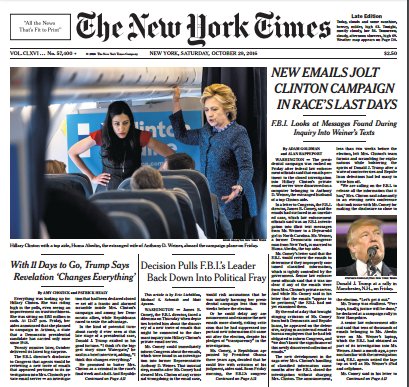 On December 11th, Silver sent out a series of tweets that made the case the Comey letter was decisive.

Comey had a large, measurable impact on the race. Harder to say with Russia/Wikileaks because it was drip-drip-drip. enhanced-buzz-4415-1346867949-21https://t.co/LgJkfYpZCkhttps://t.co/9FYMNz763b

I’ll put it like this: Clinton would almost certainly be President-elect if the election had been held on Oct. 27 (day before Comey letter).

The new point Silver is now making is that the effect of Comey’s announcement was amplified by the press.

The New York Times finally acknowledged on December 13th that,

Every major publication, including The Times, published multiple stories citing the D.N.C. and Podesta emails posted by WikiLeaks, becoming a de facto instrument of Russian intelligence.

So the press amplified the effect of the Russian counterintelligence program by publishing stories based on the information leaked through WikiLeaks.

But the press also amplified the effect of Comey’s announcement.  With the information we have now, we can see Comey’s announcement had a decisive impact on the election and the nature of its impact was the product of a number of factors, including the coverage it received from the press.

But this does not change the fact the press was also complicit in the efforts by the Russians and the FBI to illegally influence the election.  This part of the story is not being covered by the press.  This issue needs to be discussed by citizens who are not in the press so that it can be covered and critically analyzed objectively.  A panel discussion on the topic lead by Chuck Todd will not prepare us to defend our democracy in this information age.