Flynn offers to cooperate with congressional probe in exchange for immunity

Former national security adviser Michael Flynn has offered to cooperate with congressional investigators in exchange for immunity from prosecution, a suggestion that has been met with initial skepticism, according to people familiar with the matter. 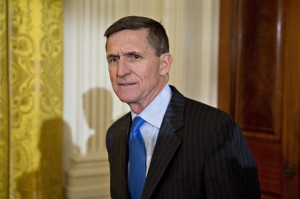 “General Flynn certainly has a story to tell, and he very much wants to tell it, should the circumstances permit,’’ Flynn’s attorney, Robert Kelner, said in a statement Thursday evening. “Out of respect for the committees, we will not comment right now on the details of discussions between counsel for General Flynn and the House and Senate intelligence committees, other than to confirm that those discussions have taken place. But it is important to acknowledge the circumstances in which those discussions are occurring.’’

The committees are both looking into whether any associates of Donald Trump may have coordinated with agents of the Russian government seeking to meddle in last year’s presidential election. The FBI is also investigating. The Trump administration has denied any such coordination.

The story was broken by the Wall Street Journal.  NBC News reported on March 31st that the Senate Intelligence committee turned down Flynn’s request for immunity, according to a senior official.  There is blood in the water.

Mike Flynn Offers to Testify in Exchange for Immunity, The Wall Street Journal