CNN reported on November 1st that, “The FBI on Tuesday — one week from Election Day — released heavily redacted files from its 2001 investigation of President Bill Clinton’s
pardon of Marc Rich.”  CNN reports this release drew condemnations from democrats.  The bureau provided a response to these concerns.

“The FBI’s Records Management Division receives thousands of FOIA requests annually which are processed on a first in, first out basis,” the bureau said. “By law, FOIA materials that have been requested three or more times are posted electronically to the FBI’s public reading room shortly after they are processed. Per the standard procedure for FOIA, these materials became available for relea 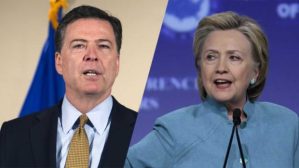 se and were posted automatically and electronically to the FBI’s public reading room in accordance with the law and established procedures.”
The release was posted on Twitter by @FBIRecordsVault, an account that posts material from FOIA requests on subjects of public interest.
Prior to Sunday, the account hadn’t tweeted since October 2015. A law enforcement official told CNN that the Twitter account is an automatic feed and the tweets are not done manually. The official said the feed was down for a year until Sunday, when it was fixed and then began tweeting automatically.
The account has recently released documents related to Donald Trump’s father, Fred Trump, and the report on Hillary Clinton’s email use at the State Department. It’s not clear that the eight pages of documents about Fred Trump were related to accusations of housing discrimination referenced by Fallon.

In order not to violate the Hatch Act, their must be some compelling reason for this release that would justify it occurring so close to an election.  Let’s count the different attempts to provide one.

The answer provided by the bureau and the release of the information both raise psychological issues.  First, the fact that the answer cites three different levels of policy, procedure and law, but does not provide any explanation for why the twitter feed was fixed one week before the election, demonstrates that the bureau feels guilty about fixing the twitter feed, really guilty.  The fact that the FBI is releasing information about a Bill Clinton pardon one week before the election is a sign that those forces opposed to Hillary Clinton in the FBI are so devoted they will go into the vault in pull out information about her husband 15 years ago to make her look bad.  This tweet from the FBI is evidence of Trumplandia and the revolution in the FBI described by Rudy Giuliani.

Fixing this twitter feed one week before a national election is a violation of the Hatch Act. The FBI should not be releasing any information relating to either of the candidates so close to an election.  This point is made compelling by Richard Painter, the former chief White House ethics lawyer from 2005 to 2007, during the Bush administration, in an article in the New York Times explaining why he brought a complaint against the FBI to the Office of Special Counsel.